The Chicago Room Mural Has A Story To Tell

“I had the idea to pay tribute to my father-in-law and our families by commissioning the mural you see today on the second floor. Historically accurate, this mural paints a vivid photo of Franklin and Illinois Streets looking east as I remember it from when I was 7 and would open the door for customers.” 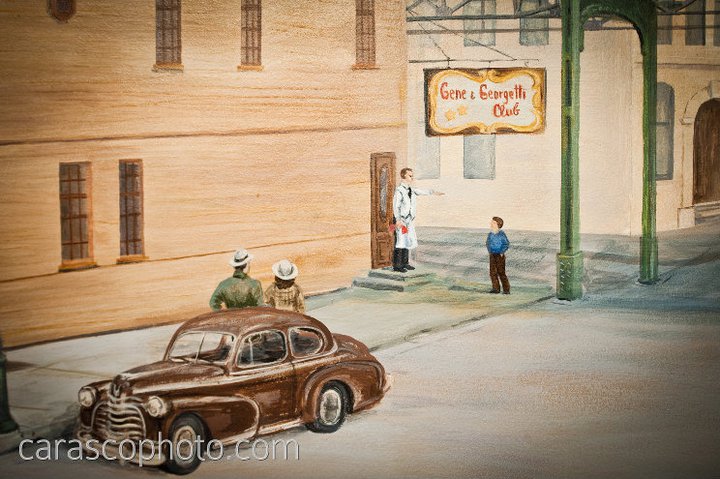 In 1944, just three years after Gene & Georgetti opened its doors, I was born in a wooden two flat apartment just 200 feet west of the restaurant.

When I was about 7 years old, I would walk down to Gene & Georgetti and open the door for people to make tips!

A man in a white shirt, tie and an apron would chase me away and told me to stay away. Of course I would always come back to make more tips.

When I was in 2nd grade, they tore down the building I was born in and we moved to the corner of Superior & Wells Streets just a few blocks away.

I never had any contact with Gene & Georgetti after we moved. I grew up, went to school and at age 21 I was drafted into the U.S. Army. I served over seas for 2 years and while I was gone, my brother bought a house across the street from Gene & Ida Michelotti…the Gene from Gene & Georgetti.

I used to visit my brother quite often and I would see this pretty young lady in front of the house. I got up enough nerve to ask her out. Her mother put together who I was from her old neighborhood memories.

When I picked Marion up for our first date…her mother answered the door and said, “Boy, you look just like your father”. Then I met Gene and he said, “So you’re the kid that I used to kick in the butt in front of my restaurant.”

Well, Marion and I got married in 1969. Gene died in 1989 and we bought the restaurant from her mother in 1992. It was at this time that I had the idea to pay tribute to my father-in-law and our families by commissioning the mural you see today on the second floor. Historically accurate, this mural paints a vivid photo of Franklin and Illinois Streets looking east as I remember it from when I was 7 and would open the door for customers.

I am the young boy at the door and Gene is the older gentleman in the apron on the mural. Across the street you’ll notice Divine Ice Cream, a tribute to the soda shop owned by Gene’s sister, Bruna, and his brother-in-law Giovanni.

On the second floor of the building one over from the restaurant you’ll see a silhouette of a woman – that was my mother, Mary. Both sides of our family have roots in this River North neighborhood. They go back farther than Gene and Georgetti, from when both families emigrated from Italy in the early 1900’s.

To mark the contributions that these proud and hard working individuals made to the neighborhood both my mother, Mary, and my father-in-law, Gene were given honory street dedications in River North. Thank you for joining us this evening and for being a part of our family. The history of Gene & Georgetti continues to be the oldest, family owned restaurant in Chicago!

A tribute at the bottom of the mural says “Dedicated to Gene from Tony”.