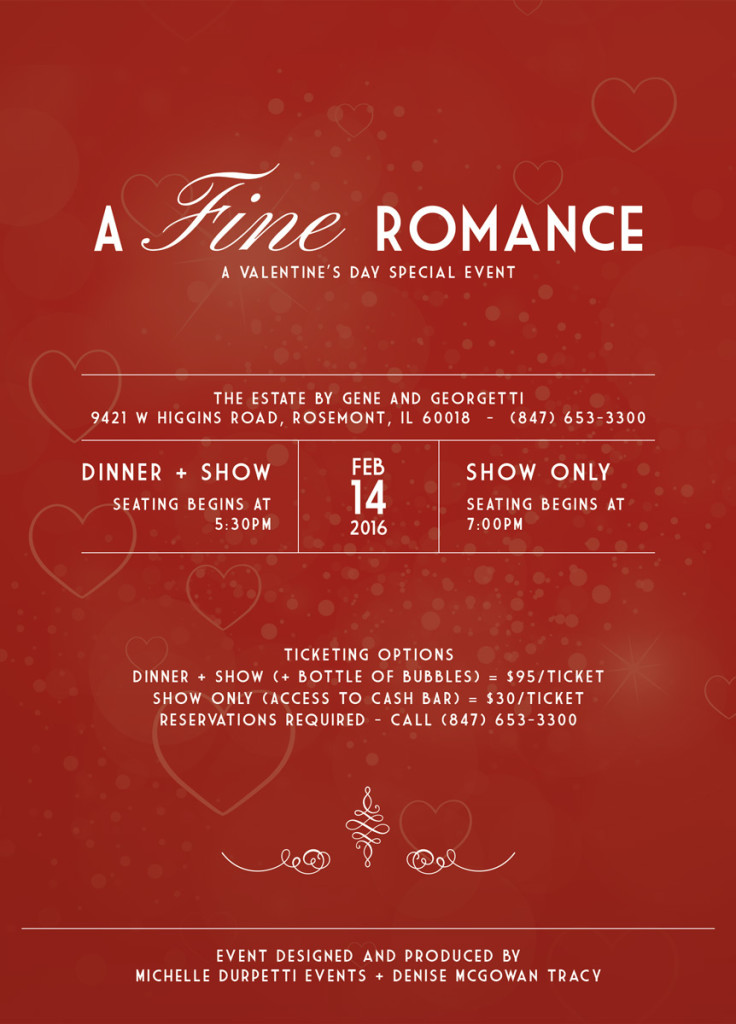 Celebrate Valentine’s Day at The Estate by Gene & Georgetti in Rosemont with ‘A Fine Romance,’ a special evening featuring a Prix Fixe Dinner and Live Music

Seating for the show only begins at 7 p.m. and costs $30 per person plus tax and gratuity, with access to a cash bar.

Seating for dinner and the show begins at 5:30 p.m. and costs $95 per person plus tax and gratuity, and includes a complimentary bottle of bubbles (Prosecco) for each couple. The four course prix fixe menu features:

The memorable evening of ‘A Fine Romance’ will also feature performances throughout the night featuring romantic tunes from Chicago’s top entertainers:

Joan Curto: Named a “cabaret icon” by NBC News Chicago, Joan is a familiar face in the Chicago music scene. She has performed at various Chicago theaters and in some of the top cabaret clubs and concert series including New York’s Jazz at Lincoln Center and The Metropolitan Room. She has been awarded the Chicago After Dark Award for Outstanding Cabaret Artist and Howard Reich from the Chicago Tribune describes her as “a seasoned interpreter who makes every note count.”

Beckie Menzie: a three time winner of Chicago’s After Dark Award for Outstanding Cabaret Artist Award and is hailed by Chicago’s WGN Radio as “one of the city’s finest cabaret performers,” Beckie has appeared at some of the nation’s top nightclubs and concert venues including the legendary Carnegie Hall and Lincoln Center in New York. Beckie has two acclaimed solo CD’s and performs regularly with Tom Michael, which Chicago Tribune calls “one of the most compelling duos in cabaret.”

Reservations for ‘A Fine Romance’ are required and can be made by calling (847) 653-3300. A credit card is required to hold the reservation.