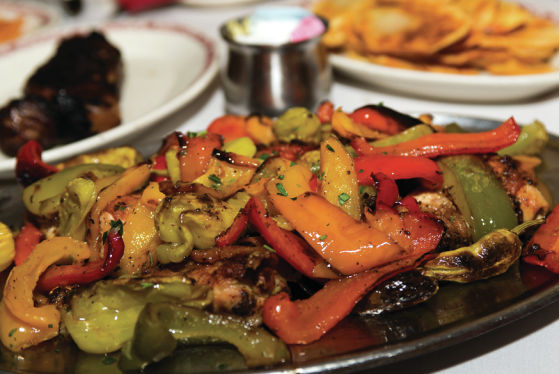 Gene & Georgetti ( 500 N. Franklin St.; GeneAndGeorgetti.com ) is not just a restaurant—it’s an institution. In a world of restaurant trends, this restaurant has always been steady, offering patrons a generous helping of tradition.

The old-school Italian steakhouse has earned this label not only because of its extensive history ( with 2016 marking its 75th year of existence since Gene Michelotti and Alfredo “Georgetti” Federighi founded it ) but because of how the staff seemingly treats every customer to walk through the restaurant’s doors. Each patron is treated like an extended part of the Gene & Georgetti family—treatment that practically ensures a loyal following.

The family mentality extends to the staff itself. During a media visit, it was revealed that the shortest time one of the servers has been with Gene & Georgetti was 19 years—with the formidable JJ proudly stating he’s been with the restaurant for more than 35 years.

By the way, said history has included an influx of celebrities, including Frank Sinatra, Lucille Ball ( the subject of a fascinating story involving the restaurant ), Keanu Reeves, Russell Crowe, Bob Hope and one of this writer’s favorite actors, Dennis Farina. ( It turns out that Farina went to school with Tony Durpetti, who married Michelotti’s daughter,Marion, in 1969. ) Carol Burnett—who was in town for her shows at The Chicago Theatre—was slated to stop by the day I was there.

And then there are the murals. While you can practically smell the cigars that were smoked back in the day, there are visual feasts through the place—including the one in the Chicago Room on the second floor that even shows Durpetti as a kid.

General Manager Rich Ciota ( who’s pretty busy constantly commuting between the long-established River North location and the Rosemont branch that opened last year ) discussed several aspects of Gene & Georgetti. ( Ciota went to Kendall College, adding, “I graduated in ’93. I graduated on a Friday and started here the following Monday—and I’ve been here ever since.” ) Ciota comes off as pretty old-school himself; talking about the culinary concept of molecular gastronomy, he said, “I’m here to eat. I’m not here to experiment. What am I—a science major?”

And, of course, there’s the food. At Gene & Georgetti, it’s about dishes meant to satisfy in terms of quantity and quality. Even a side of garlic spinach looked like it could feed a family of four. However, there were plenty of other delicious items, including the chicken alla Joe, garbage salad and perfectly cooked New York strip as well as desserts such as the lemon creme cake, spumoni and tiramisu.

Service, history and hearty food are three of the reasons Gene & Georgetti has been around for several decades—and probably will be for several more.