Eat (and Drink) Your Way Through Sinatra’s Chicago

By Jennifer Billock on Smithsonian.com | December 11, 2015

Frank Sinatra may have been a blue-eyed boy from Hoboken, but he had a real thing for Chicago. Sinatra claimed that he performed in Chicago more than any other city—even Vegas. It was where he made a name for himself as a performer, first working the room as an opening act at the Sherman House Hotel and then finding fame when he took up with the Tommy Dorsey Orchestra at the Palmer House.

During the singer’s heyday, he had the run of the streets with his Rat Pack pals and celebrities including Marilyn Monroe and Ella Fitzgerald. Between performances, he spent hours tucked into local clubs. Even his love affairs reflected his love of the city: When Sinatra married Barbara Blakeley, he made sure to have his wedding reception at the Italian Village.

But the crooner of songs like “Chicago” and “My Kind of Town” was also part of the city’s dark side. In 1960, he allegedly helped Chicago mobsters buy votes for the John F. Kennedy campaign. When the mafia came under investigation during JFK’s term, Sinatra paid the price—by playing eight consecutive days of forced performances with the Rat Pack at mob boss Sam Giancana’s night club in the Chicago suburbs.

You can still tour or see a show at many of the performance venues where Sinatra took the stage, but why not toast the singer’s 100th birthday on December 12 from one of his favorite watering holes? Each of these bars and restaurants was frequented by Sinatra and his cronies, and together they make up a delicious tour of Frank’s Chicago.​ If you’re going to raise a toast to Ol’ Blue Eyes, consider doing it with a Jack on the rocks. Frank would prefer it that way. 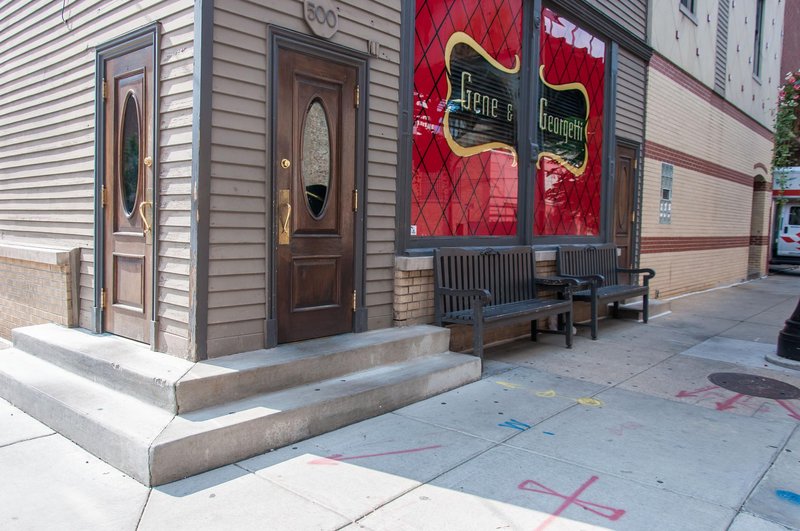 Sinatra loved the food at Gene and Georgetti, which, like Gibsons, is a long-time celebrity home. The restaurant has served steaks to guests ranging from Sinatra and Lucille Ball to Keanu Reeves and Will Ferrell and still attracts devoted regulars, some of whom have been coming for over 50 years. Owner Tony Durpetti tells Gerzina that Sinatra preferred to dine without the rifraff or the regulars: He always came in after the restaurant was closed and could be found eating dinner there with friends late into the night.

You can check out the full feature on Smithsonian.com

(PDF version of this feature)