Artist Josh Moulton created a painting based on a photograph he took on a whim — little did he know, it was priceless for those who remember Bill Maroulis. View Full Caption

LINCOLN PARK — Roughly four years ago, artist Josh Moulton was walking underneath the “L” tracks with his camera in tow when he came across a gray-haired man sitting on a bench outside of famed steakhouse Gene & Georgetti’s.

“The shadows were great, with the light filtering through the tracks. I love that kind of stuff,” said Moulton, who walks the streets and take pictures of scenes that eventually serve as inspiration for realistic paintings. He sells the original paintings at his Lincoln Park gallery, 2218 N. Clark St.

It wasn’t until this spring — after posting a picture of the finished painting to social media — that the folks at Gene & Georgetti’s, 500 N. Franklin St., reached out to Moulton, saying “We’d be very interested in acquiring this painting. It would be very meaningful to us.”

Moulton had unknowingly captured Vasilios “Bill” Maroulis, the restaurant’s longtime bartender who died in April of this year. 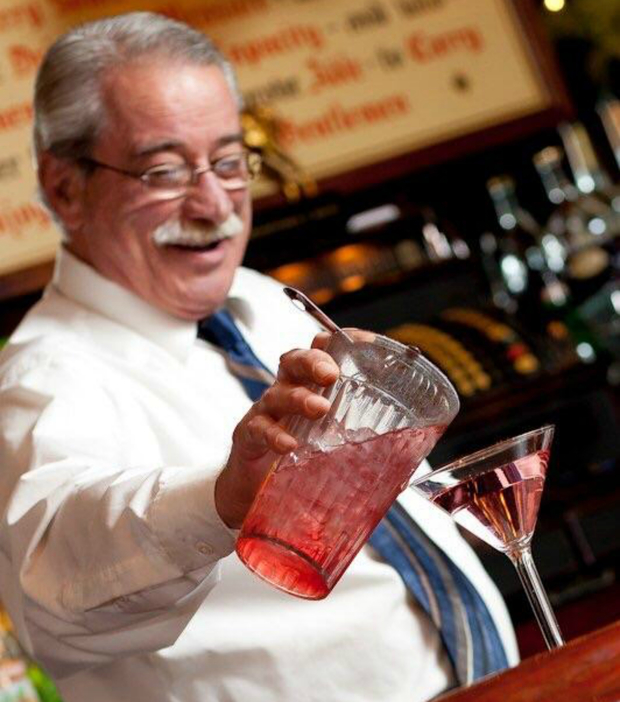 Maroulis’ son, Tasos, was “stunned” to see a painting of his dad online just two weeks after he died.

“It was very surreal and it gave me goosebumps. I used to sit out on that bench and talk to him. We’d have our father-son conversations out there a lot of times,” said Tasos, who now works his father’s bar.

Maroulis was much more than a bartender. The Greek transplant is credited with making the mahogany bar at Gene & Georgetti’s the place to be during lunchtime hours.

“The bar did not really have a regular crowd [before Maroulis]. It was just people waiting for their table. Next thing you know, the bar was full on a daily basis,” Tasos said.

Maroulis’ regulars formed a club they dubbed “The Mahogany Club.”

“I think his personality created it and created the warm and comfortable feeling. Like he always said, he wasn’t the best bartender when it came to making drinks, but he he knew how to make people enjoy themselves by listening and creating a nice, comfortable vibe,” Tasos said.

Tasos said it was his dad’s genuine, big-hearted demeanor paired with his “to-the-point attitude” that kept patrons like Gary Penrith coming in every morning and afternoon.

Penrith said he and other members of the club would get an early start on drinking thanks to Maroulis, who helped them sneak into the restaurant one or two hours earlier than it was scheduled to open.

Maroulis treated his customers like family, calling them on holidays and inviting them to a meal in Greektown every July when the restaurant would shut down for a week.

“He wouldn’t let you pay for parking or a drink,” Penrith said of the annual outing.

Tasos recalled the story of when his dad was first being interviewed for the job. In his signature deep voice, Maroulis said to owner Tony Durpetti: “Let’s just do it this way. You might not like me. I might not like you. So why don’t you just give me a week to work? If you don’t like the way I work, you don’t have to pay me and we’ll go our separate ways.”

Right away, Tasos said, Durpetti “fell in love” with his dad’s no-nonsense personality and offered him the job — one that he kept for 20 years before passing away of lung cancer at age 71 in April.

After Maroulis died, Durpetti put up vintage photographs of the popular bartender behind the bar to commemorate him. But once Durpetti caught wind of Moulton’s artwork, a print of Moulton’s painting replaced the photos, which continues to draw admiration from regulars and non-regulars alike.

Tasos said while he would love to own the original painting, he doesn’t “have that kind of money.” The original price tag was $5,000.

It turns out, Tasos doesn’t have to come up with the money because Penrith and other members of the club chipped in to buy the painting and are planning to give it to Tasos and the rest of Maroulis’ family as a gift.

“That’s where it belongs,” Penrith said.

Moulton was very pleased to hear that the painting is going to Maroulis’ family.

“I love the idea that his son is going to get this painting. I produce artwork because I think it’s interesting and I think composition is important, but also the social commentary you can make with your artwork is really great too,” Moulton said.

“[This piece] is really, really meaningful to so many people that I don’t know. That place is so important to so many people I’ll never meet. But if he wasn’t out there having a cigarette, I would’ve never done a painting of the restaurant.”