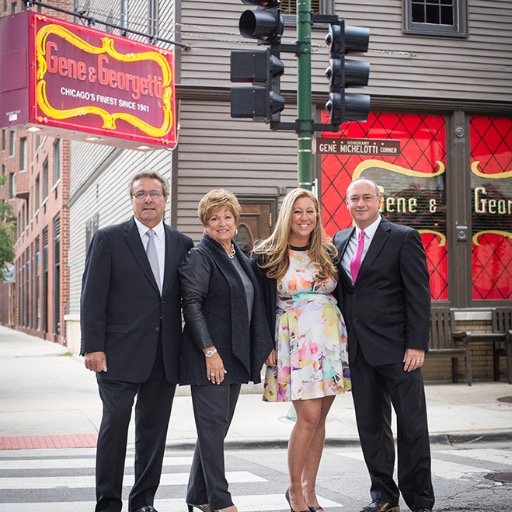 The First Family of Steak–Tony, Marion and Michelle Durpetti and Richard Ciota of Gene & Georgetti’s Restaurant

Legendary restaurant, Gene & Georgetti’s, is celebrating a milestone this month, its 75th anniversary! Picture this, the year is 1941: The Chicago Bears are the pro-football champs, Joe DiMaggio’s 56-game hitting streak begins, the Chicago Cubs are the first baseball team to play organ music during a game and gasoline costs 12 cents a gallon. Times may have changed but this world-renowned restaurant has remained the same–fabulous in every single way!

Spanning three generations, G & G’s continues to be family-owned and operated since Gene Michelotti and his partner Alfredo “Georgetti” Federighi opened its doors in 1941. The restaurant is now run by Marion, Gene’s daughter, and her husband Tony Durpetti along with managing partners Rich Ciota and Michelle Durpetti.

The restaurant, nestled under the El tracks at 500 N. Franklin, has history seeping through every inch of the building, from the mural painted on the second floor (that shows Tony peeking through a window in his old neighborhood if you look very closely), to the walls on the first floor lined with photos of famous faces (Lucille Ball holds pride of place directly over longtime regular, Terry “Whitey” Pearson’s personalized plaque).

So, for this momentous 75th anniversary celebration, Gene & Georgetti’s is giving back. A 75th Anniversary Menu for Two ($75) will be available for three days only, beginning Thursday, July 21 until Saturday, July 23, in both the Chicago and Rosemont locations with all proceeds benefiting the Cystic Fibrosis Foundation of Illinois. (The CFFI honored the restaurant with the inaugural Chicago Classic Award for lifetime achievement at its 2015 Jean Banchet Awards).

Love and congrats to the First Family of Steak! Long may you reign!

Click here to see the feature online at ChicagoNow.com.